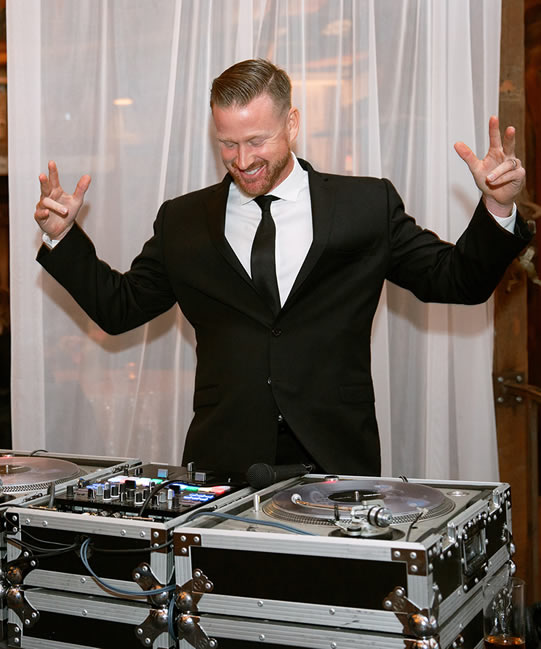 Trevor Williams has been blending everything from Hip Hop to Jazz, Funk, Rock, Latin and Top 40 for over 15 years up and down the California coast. Beginning at the age of 14, Trevor began learning on a pair old Numark turntables after school in his garage. Once he learned the basics of mixing and scratching, he never looked back. Trevor launched Santa Cruz DJ Company in 2008 with his father and longtime DJ and music enthusiast, Joe Williams. In the first year the company DJ’d at maybe a dozen parties. Now in 2017, the company has grown to providing music and event production for roughly 200 events a year from Napa all the way down to Santa Barbara. These days Trevor resides in San Francisco where he DJs at venues such as AT&T Park, The Regency Ballroom, Terra Gallery, and the Moscone Center for various clients. He’s DJ’d for companies such as Google, Kaiser, Kodac and Teecom to name a few. “I feel very blessed to DJ at so many beautiful places up and down the Bay Area." Trevor has worked professionally as a DJ and MC at hundreds of events over the past 12 years. Traveling as far as Seattle, Denver and San Diego, he stays in demand year round playing at hundreds of weddings, corporate events and clubs. His still remains close to his hometown playing regularly at Motiv Nightclub, Seascape Beach Resort and Chaminade Resort, as well as dozens of local Santa Cruz venues up and down the county. Inquire today to book Trevor for your next event.

Joe is a fourth generation Santa Cruzan that has been around the wedding and bridal business for over 25 years. Working in the family business, Dell Williams Jewelers, has enabled Joe to establish relationships with countless couples in the midst of anticipating and planning their special wedding day. The opportunity to partner with his son and to be immersed in his own passion for music is what brought about the reality of the Santa Cruz DJ Company. Joe’s passion is playing great music in all genres and helping to make every occasion run smooth. His motto is, “If everyone is having a good time, then I’m having a great time.” Call Joe about the music for your next occasion.

We are excited to have Josh, another Santa Cruz native join the team at Santa Cruz DJ Company. Josh brings a wealth of musical knowledge and an excitement that is consistent with the Santa Cruz DJ Company tradition. Josh's passion for music is a great asset to any occasion and his outgoing, warm personality makes him a pleasure to have at any event. Our clients will love working with Josh and his wealth of musical knowledge make him a helpful resource and a reliable asset. Santa Cruz DJ welcomes Josh's talents to the company.

When DJ Cody (aka DJ Cocheze) was 18-years old, hip-hop legend KRS-One recognized his musical gift and invited him to be his tour DJ and backup MC. Cody toured the world for 4 years gaining recognition and performing venues of up to 10,000 screaming fans. DJ Cody is older now, has a young family, and divides his time between DJing weddings and spinning fearsome sets at some of the Bay's hottest party spots. Cody is not only a USA finalist in the world's largest DJ competition. He impresses with his modesty and focus on customer service.

Hailing from a small town in Northern California Mathew Catalan aka DJ Rufio's obsession for music started at an early age. As a kid he would always have blank tapes on hand to record his favorite tracks off the radio, in middle school he was obsessed with making mix cd's for his friends that used up as much of the 80 minutes of allotted time as possible, and once in high school his obsession with audio gear and big speakers naturally led to him scrapping together $900 from his minimum wage summer job and getting his set of turntables.
"There was no one who wanted to teach me, so I got tired of waiting and decided to teach myself how to mix. It's something I'm actually incredibly proud of, I have my own mixing style that is 100% my own and I'm not just a carbon copy of another DJ."
Now, over a decade after rocking his first event, Rufio has spun at venues across the US from SF, NYC, to Los Angeles. Residing in the Bay Area now, DJ Rufio has spun at numerous clubs and private events.
"I like mixing it up, I don't want to be a 'one genre' DJ, I like the challenge of rocking a club one night, and doing a high end wedding the next, it's a completely different world and they're both amazing in their own ways. It all comes back to the music and your ability to connect with a crowd via said music. There's nothing more rewarding to me than working hard on my own edits/remixes of songs, and then playing them in my sets and seeing the crowd's energy when they respond to it, it makes what I do worth all the hard work it has taken me to get to this point."

Scott Vaughn has been DJing since his time playing water polo for UCSC. His DJ career began spinning house parties, college events, and mixing music at several bars and restaurants in and around Santa Cruz county. Nowadays he’s a highly requested addition to our roster. Scott is consistently booked for everything from large scale weddings, to corporate events and smaller private parties. Contact us today to set up a consultation with Scott.

With an extensive background in hospitality and nightlife, Kamau began DJing while booking bands and managing private events up and down the Santa Cruz pier. It wasn’t long before he found himself behind the turntables, blending music for all types of crowds. These days you can find him DJing in Carmel, San Jose, and throughout the greater Bay Area. Kamau’s versatility and commitment to his clients make him one of our most requested DJs. Inquire with us today for his availability.

Houston Roberts (a.k.a. DJ Huey), a resident of Aptos, CA, works in the Live Event and Lighting Design business and has also been DJing for the past four years. He has done numerous private, corporate and special events, and also plays monthly at Zelda’s On The Beach in Capitola Village. With his experience in the entertainment business, he understands what it takes to be professional, bring positivity and contagious energy to every gig.

Brandon Beach began his DJ career while serving in the US Army stationed in Italy. Since moving to the Bay Area he's built up an impressive resume, DJing private events for The San Francisco Symphony, Dress for Success SF, Bloomingdales, The Arthritis Foundation, and holding residencies at some of the best nightclubs in the Bay Area. Since joining our team, Brandon has been consistently booked for weddings and other events up and down the coast. He's extremely committed to his clients and passionate about making their event the best it can be. Contact us today from Brandon's availability.

Born in San Francisco and raised in Northern California, John has always been a huge fan of the Bay Area music and club scene. John prides himself on being a club style DJ and typically mixes many different genres into one cohesive dance set to keep dance floors moving all night. With over 10 years of DJ experience, John is very much at home entertaining wedding, corporate, private and club events. John also provides emcee services that are polished and purposeful so that guests stay informed. When not working DJ events, John enjoys producing promotional mixes for his SoundCloud page to listeners worldwide. John's strengths come from connecting with people musically both live and worldwide via his energy packed studio mixes he shares with a vast and growing global audience. John's mixes have been featured on radio stations in Chicago and Los Angeles and John's work also fuels workouts for listeners on the FitRadio app. John believes his best asset as a DJ is his ability to share and receive energy from his audience which usually contributes to an unforgettable experience for clients and guests.

DJ Louie Giovanni is no stranger to DJing and his events have been recognized worldwide as an experience not to miss. He stays high in demand at venues throughout the greater Bay Area and beyond. You can find him monthly at some of California’s elite nightlife destinations from San Diego to Lake Tahoe, and performing regularly at weddings, corporate events and private parties up and down the state. Inquire with us today regarding his availability for your next event.

DJ Luis Roberto first made a name for himself playing music in the nightlife and private event scene in San Francisco. He’s performed throughout Europe and Latin America for both Sony music and MTV. After touring as a DJ, he landed himself a residency with Lululemon clothing and represented the brand at corporate gatherings and private functions throughout California. Luis now works for Santa Cruz Yoga as their in-house DJ and has recently become the latest addition to the Santa Cruz DJ Company roster, DJing weddings and private events every week. His knowledge of music, professionalism and dedication to his clients makes Luis one of the most requested DJs on staff.